Be tender to one another. Anne Émond, the director of ‘Jeune Juliette’, as interviewed by Kuba Armata.

Funny, brave and charming, Juliette is in the second grade of high school. An overweight girl, she is constantly ridiculed by her peers. As she enters a crazy period of adolescence full of unexpected twists, she will learn some lessons about boys, love, and friendship.

Kuba Armata: ‘Jeune Juliette’ is a bitter-sweet tale about a teenage girl who has to handle mockeries at school due to her being overweight. Is the film, with your screenplay, based on real events?

Anne Émond: ‘Jeune Juliette’ is my fourth film. The previous ones were intense, sad and hugely depressing dramas (laughter). At one point, I felt that I needed some fresh air; besides, Juliette is an alter ego of my teenage self, to a certain extent. I had always known I wanted to make a film about what it means to be different than all the others, and hence a little lonely. I think that I had been withholding this topic long enough to be able to approach it with a distance and a light-hearted attitude. Had I taken it up at a different stage of my life, say, ten years ago, the film would have probably been much sadder. Now that I am a bit older, I am able to look at this rather difficult period of my life with some tenderness. What differentiated me from Juliette is the fact that I was much more shy than my film character. Consequently, I didn’t find the inner courage to fight school mockeries or bullying. I wanted to talk about everything that I wasn’t able to do when I was her age.

Despite the difficult subject matter – such as school bullying or the protagonist’s complicated relationship with her mother – ‘Jeune Juliette’ is the type of film that will keep you smiling a lot all the way.

I get the impression that most of the films about teenagers or the coming-of-age ones are rather gloomy in nature. My intention was to look at it from a somewhat different angle – in a more tender, sweet and comedy-like manner. I really wanted the film to exude an air of hope. Generally speaking, Juliette has everything she needs. Perhaps she’s not dating the cutest guy at school; perhaps she’s not miss popularity herself – but she is surrounded with love. Although her family is not picture-perfect, both her father and brother give her a lot of tenderness and closeness. It’s a real, nice family, indeed. Many films about teenagers, however, perpetuate stereotypes in that regard – bickering siblings, alcoholic father, omnipresent violence. And it’s not always like that, as visible in the case of my own family. Although surely far from perfect, as a family we definitely show the love to one another.

Did you draw any inspiration from the ‘coming-of-age’ films?

I must admit I am very fond of the coming-of-age genre. If I find myself wondering what to watch on a given day, you might assume with high probability that one of such titles would be my pick. I have always been interested in productions presenting the world from a teenage perspective. In ‘Jeune Juliette’ you can trace clear inspirations from the 1980s films I would watch in my youth. I really have a soft spot for them, as they actually sparked my interest in the cinema as such. As directors, we often mention being inspired by great masters – but this is not how I personally discovered the cinema. I wanted to go back in time to my childhood when I was strongly affected by, say, Claude Miller’s ‘An Impudent Girl’ (‘L’effrontée’) from 1985. It’s the first role of Charlotte Gainsbourg, only 14 years old at the time. A lot in that production inspired me while working on ‘Jeune Juliette’.

Do you believe that the period of adolescence – when we experience everything more fully and intensely – may also be brutal when someone comes across as non-standard?

Certainly so. Moreover, it does not always end well. In my film, I wanted to reflect on the concepts of the bullied and the bully, and at the same time to show that the two roles may be combined in one person. Juliette’s peers can be cruel to her. They make fun of her, mock her, and make her life miserable all the time. She, however, mirrors that behaviour in relation to a younger boy she is supposed to take care of. I wanted to show that people are not necessarily either good or bad. They can be somewhat in the middle. When you are treated badly, this situation often significantly affects the way you treat those more vulnerable than you are. Being bullied does not necessarily entail putting yourself solely in the position of the victim. My intention was to break with the stereotypical image.

Is there actually any proper reaction to school bullying? On the one hand, Juliette tries to ignore that but there also comes a moment when she feels ready to confront her opponents.

Before the pandemic, when I was travelling a lot and showing the film, I was often asked about a possible solution to this problem. Honestly, I don’t know, really. If I knew the answer, I would probably be doing something else than a film on this issue which I treat as my contribution to the discussion. I think that ‘Jeune Juliette’ is a positive film aiming to inspire people to show some kindness to one another. That is the message that comes out of it – be tender to one another, don’t be so easily judgemental. School bullying is a serious problem and there are probably no ready-made solutions. My protagonist learns from her experience and starts to appreciate the people who love her and pay attention to her. There is no point in following those who don’t care about you at all. Perhaps recognizing such good people and trying to surround yourself with them is the first step. If you find yourself in such a situation, it is also important to remember that one day school will be over and it will all be better soon.

A lot of bad things are happening in social media at the moment. Do you see a big difference between today’s teenagers and those from the times of your youth?

When we were making the film, my young actors would sometimes come up to me, trying to convince me that in a given scene they wouldn’t say or behave like the screenplay required. But I wanted to stick to the screenplay anyway. It was never my intention to aspire to the title of a world champion in dialogue writing, but rather to make a film about the experience of being young in general, not about being young in 2020. I wanted to focus on what it means to be 14 or 15 years old and how we experience feelings like love, friendship or hatred then. That is why the characters use mobile phones so rarely. Besides, today, instead of calling one other, like in one of the scenes, they would text. Even I would (laughter). I didn’t want to imply a particular time or place as the film setting. This is not a story about a given temporal context but about being young. 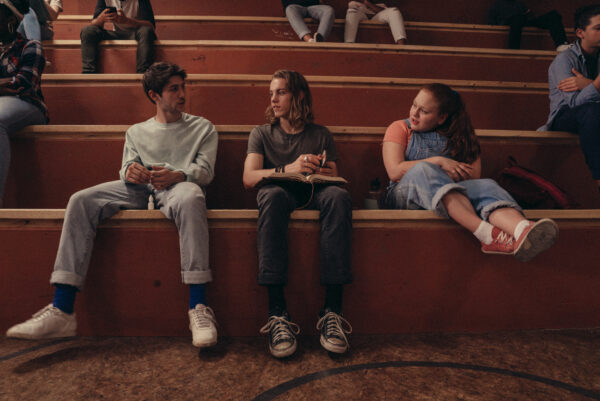 Alexane Jamieson, who has already done some acting, is brilliant as Juliette.

Casting the lead role was an absolutely crucial decision for us. Alexane has always wanted to be an actress but when we first met her, she hadn’t had much experience yet. We auditioned about a hundred girls during the casting, and it was not easy at all. Even though Montreal is a big city, it was difficult to find a girl with a fuller body shape at the casting agencies. When you want to cast a beautiful, slim 14-year-old girl – there is no problem – but in our case it was a little more complicated. We saw such girls on the streets. We even tried to talk to them but I wasn’t surprised at all that they would decline. It was a bit odd – someone approaches you on the street just because you are plus size. That is probably the worst thing a 14-year-old girl can hear. Alexane shared a lot of experience with Juliette, which I think has toughened her up, too. Some scenes were difficult but I knew this film would not hurt her in any way. She is a tough, feisty person – but she is also very nice. Certainly nicer than Juliette (laughter).