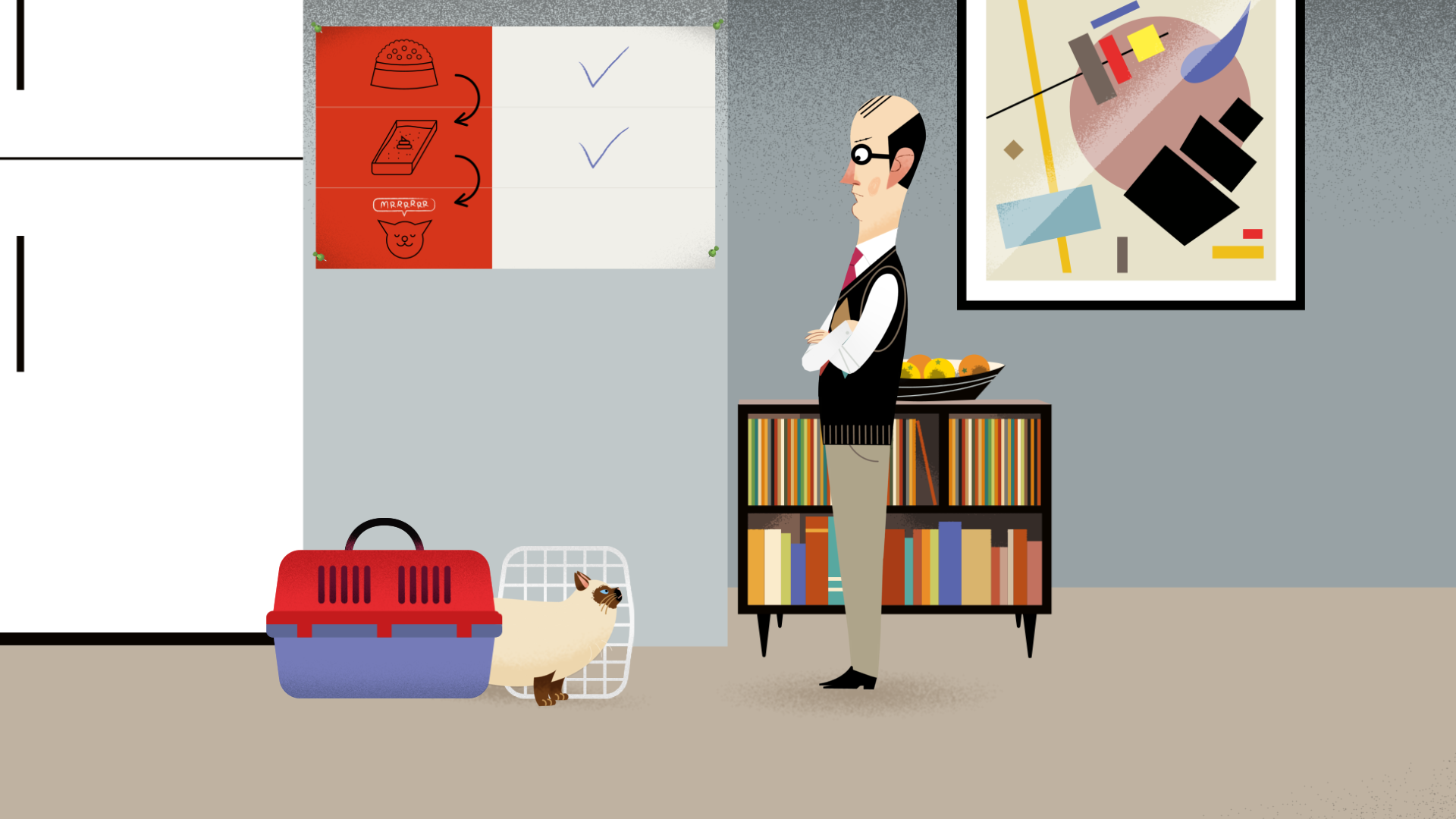 Kuba Armata: Mr Practical is an adaptation of a popular children’s book under the same title, authored by Roksana Jędrzejewska-Wróbel. How did you come across the book and was it obvious to you straight away that it would make good animation material?

Michał Poniedzielski: Joanna Ronikier, the producer of the film, approached us with this proposal. Honestly speaking, at first I had some objections and it took a while before I got round to it. I didn’t really feel that I would be able to do it, because it didn’t seem to be my style or my way of telling stories. So I was a bit sceptical at first. At some point, though, I really got involved and fell in love with the character. After talking to Roksana, who was writing the script based on her book, it clicked even more. Probably because she gave us space to introduce any changes necessary to translate the material into the language of film. I no longer felt such pressure to transfer everything on screen one-to-one, and off it went. Although I do miss the longer version of this story, which was prepared at the animatic stage – one with an extended romantic theme between Mr Practical and the pet shop assistant, a slightly deepened psychology, the issue of the main character’s deep-seated dislike of all that is childish, and with a bit more cat per second. Unfortunately, it did not fit into the budget.

Dominik Litwiniak: I personally liked the very story from the beginning. Although, as my domain was animation and converting book illustrations into film form, I was more focused on the visual layer. So the adaptation of this story is mainly Michał’s achievement. I must admit I liked Adam Pękalski’s illustrations. They are kept in a distinctive, well-thought-out style. I felt it was something that could come out really well in animation, on screen.

For you, Dominik, this was the first directorial experience. Previously you worked as an animator or lead animator. Did it click for you?

DL: Totally. And there are already more things in the pipeline, although I can’t talk about them yet. But for sure animation combined with storytelling is a very interesting thing. I am glad that in this case, I could watch how Michał does it.

M.P.: To learn what mistakes not to make (laughs).

D.L.: Michał really worked out everything very well, so this cooperation was very fruitful for me.

Michał, you mentioned your convincing to the story was a gradual process, and that you talked with the screenwriter who is also the author of the book. Did you clarify your doubts together?

M.P.: At the beginning, Asia Ronikier acted as an intermediary, and later I talked with Roksana directly, asking about the possibility of introducing some changes. Especially in the context of how the character acquires the cat. It seemed to me an ideal opportunity to show young viewers some positive role models. To let them know that the decision to get a cat has to be well thought out and involve a specific action. It’s about some truth about ‘owning’ a pet. This theme was missing in the original – Mr Practical simply acquires the cat, almost buys it. Myself, I am against trading pedigreed animals. Since we want to touch the subject deeper, I wanted it to be closer to the truth. This is when the idea of a shelter as a place where you ‘go to get a cat’ came up. Unfortunately, due to time constraints and drama reasons, this thread had to be left out, which is a shame. There were a few more such trifles. Roksana gave the green light, convincing me that she herself needed some distance, as it is not easy to work on one’s own text. I felt that she trusted me, which made me take more responsibility for the film.

Since you brought up the subject of cats, do you agree with one of the main theses of the film, that nothing soothes like their purring?

M.P.: I can write volumes on this. I have two cats myself. In difficult life situations, their presence was a life-saver for me. There is a kind of sense of possession of their human parallel with deep affection towards that person. I don’t feel the same when it comes to dogs – they tend to focus too much on their owner. In cats I find this kind of balance between being alone and being with someone. And that purring has helped me through emotionally difficult situations many times. I owe a lot to these two animals. I already said goodbye to scratched furniture a long time ago. For a week now, I have been wondering how to hang the curtains so that they don’t get torn, though. 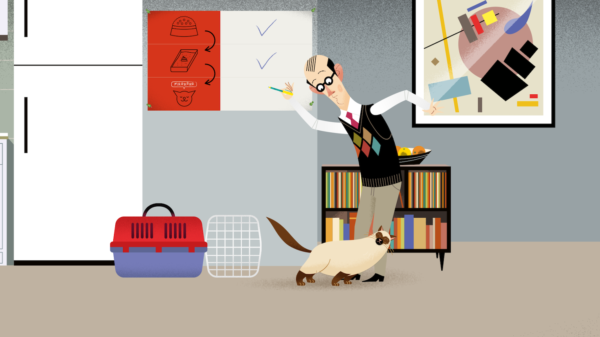 For me, the main character of your film represents the modern world a bit, where there are many Mr Practicals for whom everything has to be right in an Excel sheet, but not necessarily in emotions.

M.P.: To be honest, I didn’t have to look far. When I discovered myself in Mr Practical, it was enough for me. Nonetheless, such broader social diagnosis may be justified. I noticed that this systematic approach and the proverbial Excel sheet give the illusion of control, which makes it harder to see things happening on other levels – emotional or interpersonal. This is one of the factors why this story became somewhat personal to me and why I wanted to get more involved in it.

Does being Mr Practical work well in animation or is it mostly about creativity and letting your imagination run wild?

D.L.: I would say both. I, for example, consider myself to be quite an obsessive person, which means Mr Practical mode turns on in me in terms of striving for perfectionism. I know I need to let that go a bit, because creating stories is also about allowing yourself to dream. Which for us, adults is not particularly easy. Mostly, because it requires us to forget about all our problems, goals, things to achieve in favour of daydreaming. On the other hand, in order to achieve a decent result, you have to sit down and painstakingly perform, frame by frame, paying attention to every detail. For me it’s such a constant balancing act between the two approaches.

M.P.: When you work on animation, you have the feeling that it’s a medium that you can potentially control fully. After all, you can draw and move literally anything. This makes us want to go wherever eyes take us. And there is this temptation to act on instinct, gesture, improvisation – as in other fine arts. It soon turns out that the temptation is difficult, if not impossible to fulfil. So it seems that animation is the domain of Mr Practicals. But when I compare it to any acting set, I feel that when working with animation, I am resting. The pace of working with a live actor is overwhelming. There is rarely a set where you have the opportunity to test several different ideas in a given situation. In animation, you can afford to do that, and the only consequence is that you sacrifice your own time. Conclusion – of the two disciplines, I choose synchronised swimming.

From your perspective, are young viewers a demanding audience?

M.P.: I have experience from two fields and a bit of an impression that there are two audiences. There are productions for children where you can see from the very beginning that they were made only for the numbers and there are those you recognise as valuable things. When I decide to do something for children – which is a difficult task – I always strive at doing it in a way that would produce a result I would be willing to show to my own kid. Without feeling embarrassed, without cheating. I’ve taken part in those shallow productions and ones that are meaningful. I will always advocate for the latter, but I am also conscious of what the market demands. I recently looked at the children’s section on Netflix and was struck by the amount of stuff out there. Still, 90% of these productions fall into the former category, and only once in a while will you find something worth giving your eye and heart to. Children’s audience should be treated exactly the same way as adults. Quality is a must. Although you also have to accept that there will be films where this is not the most important element.

D.L.: I agree that young audience is very demanding. I work on series for young people and I also have two kids myself, so I know what it’s like. I have appreciated some productions that may seem simple on the surface, but take children seriously. The best ones are not necessarily the most flashy, colourful ones where there is a lot going on. They may draw children in, but the content is mindless. And that’s not the point. There are things that may not be as glamorous, but are certainly more thoughtful, talking about everyday problems in a valuable way. My children like such productions better, but children have different criteria for evaluation than we do. You have to learn what appeals to them. That being said, we definitely have to take this audience seriously. 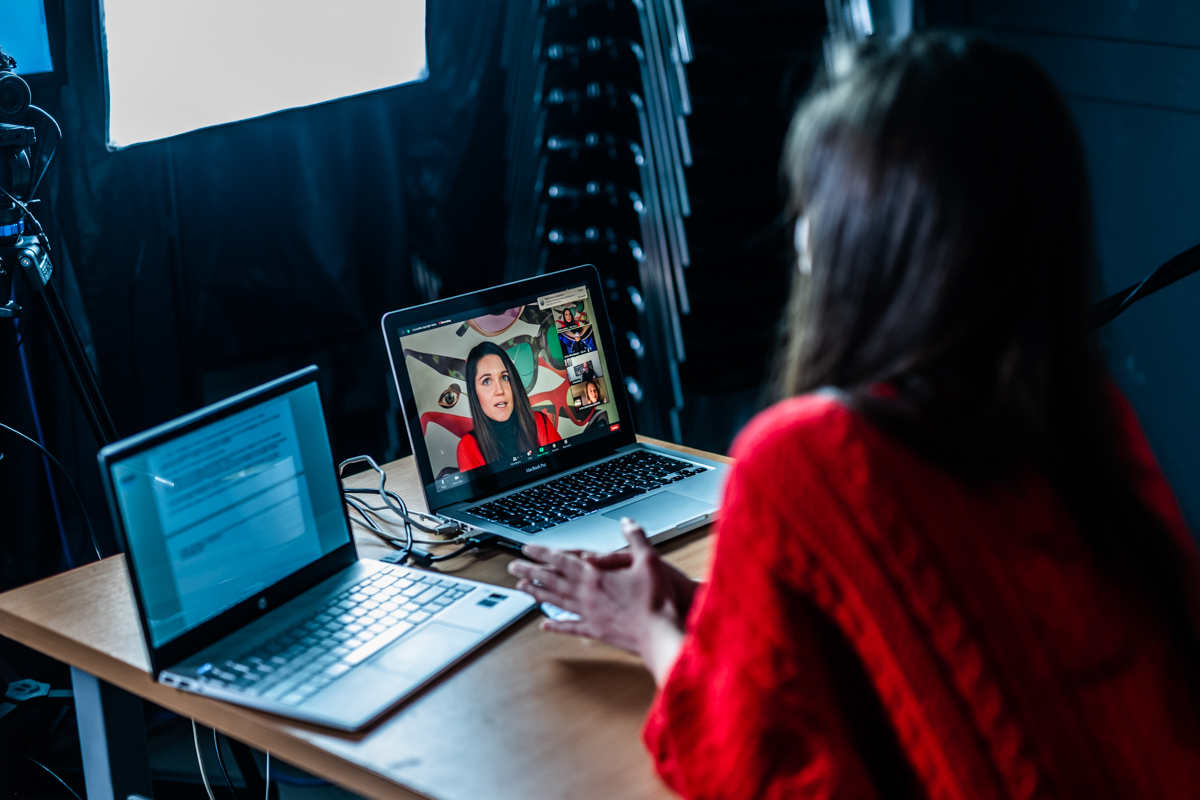