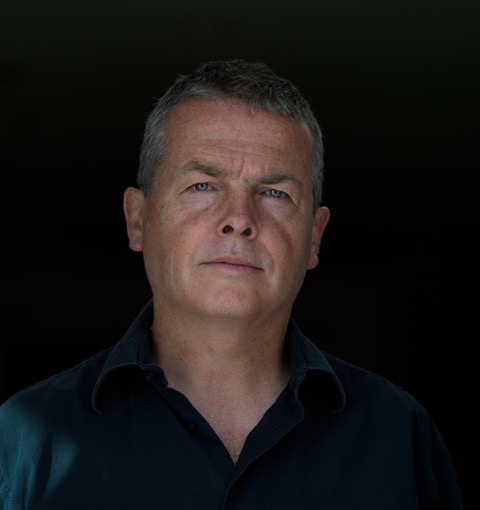 When in an interview director Nick Kelly was asked what advice he would give to upcoming Irish directors, his answer was: “Make films about being human rather than about being Irish.” And that is exactly what Kelly did with ‘The Drummer and the Keeper’, a deeply humane story of an unlike friendship between two young men who don’t have much in common, a rock‘n’roll drummer with bipolar disorder and a teen with Asperger’s.

Gabriel’s recalcitrant and occasionally pyromaniac mood-swings get ignited easily. The authorities recommend that he take up football as a therapy. There he meets Christopher, a goalkeeper with an obsessive interest in getting things properly tidied up and classified. Maybe he can even tidy up Gabriel’s life? With their lives getting more entwined, the pressure on Gabriel grows, and soon we’ll find him at the beach, setting fire to an old sofa…

Gert Hermans: Always a good thing to start a film with a naked man’s butt.

Nick Kelly: I think it’s the perfect opening for our story, but the truth is that it’s a happy accident that it worked out this way. We actually had six pages of script which explain why Gabriel is half-naked on the beach and where that sofa came from. We shot all those pages, and it wasn’t until two weeks before we locked our cut that I attended a test screening and realized from the energy of the audience that they didn’t really need to know the backstory to Gabriel’s nudity or his desire to destroy a sofa to understand that this is a boy with a problem. Once I’d realized that, it became obvious to me that this was the best opening scene – and now I’m kind of amazed that it took me so long to get there. 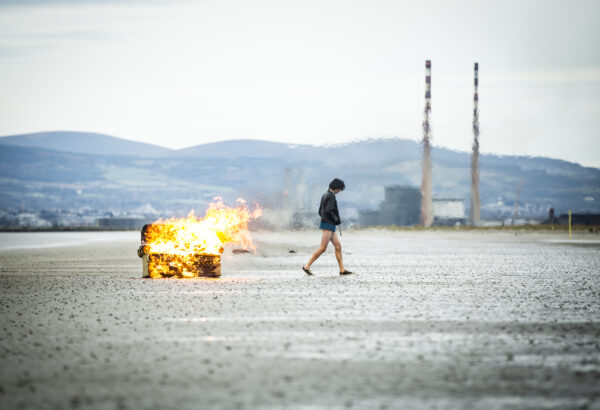 That was a moment of true clarity?

One of the best pieces of advice I ever heard came from my countryman Lenny Abrahamson who said: your job is to “be present”, to stay aware of all the surprising new possibilities that emerge during the process, rather than slavishly stick to the masterplan of your script (though, especially on a movie as low budget as ours, you do need to have a very well worked out masterplan).

What’s so different about drummers?

Well… some of my best friends are drummers, and most of them aren’t bipolar so I’m not sure I can generalize. I guess there is something a little masochistic about how much equipment you have to load out, set up and pack away just to get playing. And perhaps choosing to repeatedly hit things with sticks is pretty primal and cathartic, so maybe they choose drums because they’re the people with the greatest need to get stuff out of their system. But craziness in rock‘n’roll is not confined to drummers in my experience. 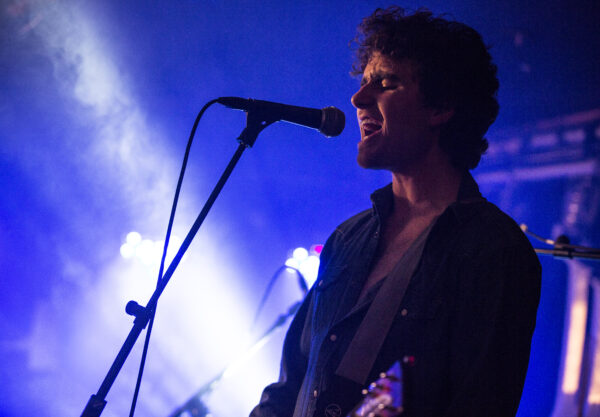 “Rock and roll is supposed to be out of control,” Gabriel says.

While mental health issues are all around us, I do believe there’s a particular concentration within the community of rock musicians. Partially it’s because there’s a long tradition of extreme behaviours being not just tolerated but actively encouraged – people expect their rock heroes to be “wild and crazy” – so perhaps it’s a more welcoming working environment for somebody whose own behaviours tend that way than a bank or a deli counter might be. I also think that the massive highs and lows that come with spending 23 hours of the day in boredom waiting for that one hour of onstage thrills can be very triggering to anybody who may have a vulnerability to depression or psychosis or other mental health conditions.

Only every now and then do we see Gabriel and the band playing a song, like an intermezzo, or like a song serving as a point of rest in a Disney movie.

That’s down to how much band stuff we needed to tell our story versus how much time we could afford on a 20 day schedule. We had a day and a half to shoot all the football scenes and two days to film all the gig stuff, so I was very clear about getting what I needed and not much more. I like the fact that the one full song we do see is when their relationship is just blossoming – Gabriel’s found somebody who won’t judge him, Christopher’s found a job where his neurodiversity isn’t a disqualification. Again, because we were a very low budget movie we had to choose the soundtrack music very carefully. I pulled in a lot of favours from musical artist friends. I spent two days driving around Dublin with 15 pairs of contracts to get signed and €100 to pay to each of my generous genius buddies as a gesture in return for their letting me use their song.

I never heard about football being very stimulating for people with Asperger.

In Ireland there are various organisations which run football, rugby and athletics sessions specifically targeted at people with a range of disabilities and other conditions. I remember watching a brilliant Channel 4 documentary about a scheme in London which ran football games for people with various mental health and neurodiversity issues, from schizophrenia to OCD. The specific programme that Gabriel joins is a fictional one, but the notion that group physical activity can be both physically therapeutic and socially beneficial for people with many different conditions including autism is well accepted.

Christopher looks angelic and, like many kids on the autism spectrum, he is trying so goddamn hard to do right.

As the parent of a child on the autism spectrum, I feel I have a good insight into how hard people with ASD have to work to understand and apply the rules and conventions of social behaviour that come to neurotypicals naturally. Jacob McCarthy (playing Christopher) is neurotypical, but many of the other people portraying autistic characters in the movie are drawn from an Asperger’s drama class which my own son was part of. Jacob and a couple of the other actors embedded themselves in that class for six weeks, which I think was the key to the realism of his playing of Christopher. There was a genuine bond between them and our core cast which was hugely helpful on set. Using people who actually had autism to play background characters made the filming process easier, not harder. 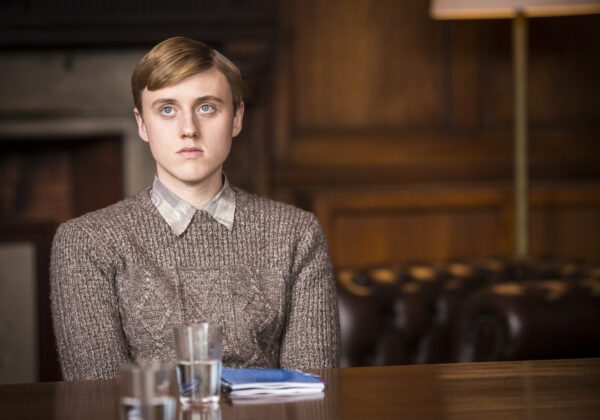 Christopher even has a love affair.

Most people with autism feel and need friendship and love just as much as the rest of us – they just find it far more difficult to negotiate and they feel rejection much more devastatingly, which causes many of them to lose heart and stop trying.

For both boys it is difficult to understand each other’s world. But with trial and error they both try.

There is this phenomenon I’ve often noticed throughout my life: in moments of personal crisis the people we naturally think of as likely to be most helpful often turn out, through no great fault of their own, to be perfectly useless. We tend to choose our friends for sharing the good times, and sharing the bad times is a job which they were never trained for! However, I also found that at these most desperate points the weirdest people emerge unexpectedly – people whom you would never even imagine as friends – who actually turn out to do or say the thing that you really need at that moment. This whole film is about unlikely but redemptive friendship, and that’s something I really believe in. You don’t get what you want, but if you’re lucky you get what you need.

There’s more than one protagonist to your story, there are two, and for both of them you had a storyline to develop, and then there is the storyline they have in common.

‘The Drummer and the Keeper’ is a buddy movie, which like all buddy movies forces two extremely different people together. As such, and despite the serious themes, it does tend towards comedy – how will these two ridiculously incompatible people find a common ground? The balancing comes from the nature of the profound difference between them: in the classic bipolar tradition, Gabriel’s whole energy swings wildly between extreme highs and lows; Christopher adheres to incredibly strict routines, because he finds any divergence from predictability very stressful. Once you establish those two energies, all you have to do is put them together and watch the sparks fly. 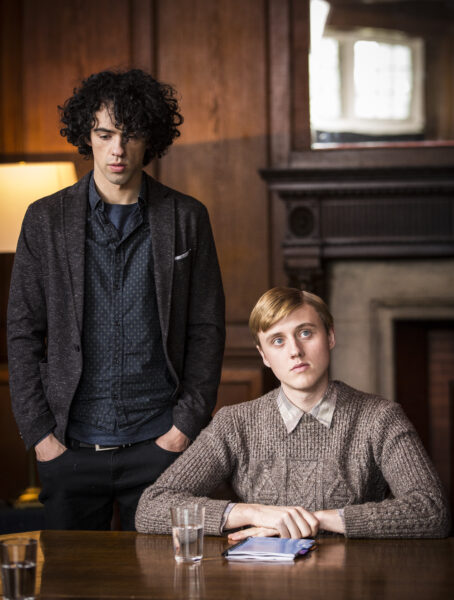 Talking about sparks, setting things on fire can be fun. Did you have fun on set with the pyrotechnics?

We actually did, in between the natural fear that you may set one of your actors on fire. The scene where Gabriel burns his car was particularly crazy – we worked with the Dublin Fire Brigade on their own training grounds, and I was stunned to realise that many firemen are actually joyful pyromaniacs. They set the car so fiercely ablaze that we all had to run away to escape the rolling cloud of poisonous black smoke that enveloped our camera – which we’d luckily left running, so we get this incredibly cool cut point where the whole screen naturally transforms into a wall of black.

The film dates back to 2017. What have you been doing since then?

I’ve been working on a couple of feature film projects. I’m always surprised at how long it takes to get movies made, but hopefully this time next year I’ll have a new one in the can. And last year I set up an independent TV writer’s room with the specific objective of generating long form stories with global potential.