Superpowers to fight shame. Review of the film ‘My Brother Chases Dinosaurs’

On the first day of the Festival, we were given a welcome as good as at the times when we could watch films at the cinema. The website is clear and user friendly, the technical quality of screened productions is high, film descriptions are informative and viewers are given flexible access to their chosen films in three time blocks. All that encourages us to take part in this year’s film feast. To some extent, the atmosphere is even a bit similar to past editions of the Festival – the directors welcome the audience before each screening and there are short online Q&A sessions after the film.

Waiting for a superhero

One of the first films that we could see on our little screens was the Italian-Spanish production ‘My Brother Chases Dinosaurs’ (‘Mio fratello rincorre i dinosauri’, directed by Stefano Cipani, 2019), which is based on an autobiographical novel by Giacomo Mazzariol. In the book, the author depicts his relation with Giovanni, his younger brother with Down’s syndrome. On the Italian book cover, under the main title you will find the following words: ‘The story of me and Giovanni, who has one extra chromosome’. When I started watching the film, I thought that I was about to see a rather serious story, maybe with a touch of optimism, but still emotionally difficult. However, the first minutes of the film surprise the viewers with a series of comical family conversations when three siblings learn that they are going to have a very extraordinary brother. Little Giacomo spends his childhood side by side with his disabled brother and keeps waiting for the day when Giovanni’s superpowers are revealed, as he is convinced that his brother must possess some since he is so different from all the others. Inevitably, when Giacomo grows up, he is disappointed to see that Giovanni not only is not a superhero, but also needs care and understanding and often causes problems in public places. All this is more or less tolerable until Giacomo reaches his adolescence and goes to high school. 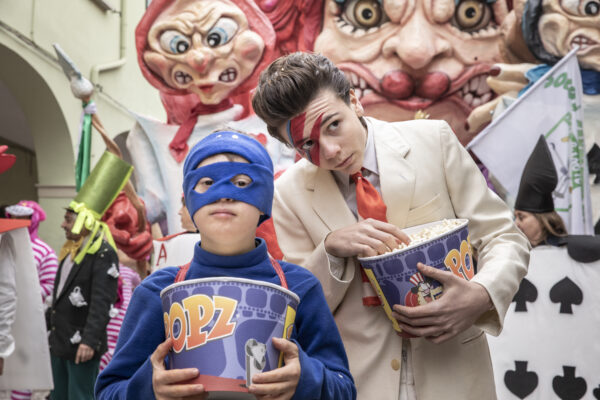 As it turned out, the film does not only depict the daily life of a family with a disabled child, but also touches upon the subject of how a teenager’s personality develops under the influence of their peers, of shame and fear of being judged. The director Sfefano Cipani draws our attention to the fact that teenagers can see anything as a reason to feel ashamed. For our hero, the reason is his brother with Down’s syndrome, but generally it can be anything else: social background, appearance, the family’s material status. In my opinion, the fact the main hero of the film is not Gio, who is experiencing disability, but Giacomo is a successful idea. It directs our attention from the Different One to the behaviour of a teenager who acts under pressure from the people around him. The paradox consists in the fact that this ‘pressure’ exists only in his mind. Giacomo assumes a priori that when his peers learn the truth, he will be mocked. So he goes further and further with his lies, stating that his brother is dead. In the end, he finds himself in a situation when it is difficult to save face. The thing that was supposed to protect him from social exclusion – disclaiming his disabled brother – paradoxically turns out to be a path leading straight to rejection. When he is left alone and realizes the consequences of his behaviour, it is his family who, despite being hurt, comfort him and show understanding of his motives.

Acceptance as a challenge

So the film is about double rejection and double acceptance: of a boy who is different, more fragile because of his disability, and a boy who is reaching adolescence and wants to show his best side but is misguided by insecurity and shame. And even though the daily life of such a family surely is more complicated than in the film, presenting such a difficult fate in a good-natured way makes the story lighter and illustrates the saying: ‘life may be tragic at times but is never completely serious’.