There’s a child in us, too. Mariusz Palej and Magdalena Nieć, the creators of ‘Black Mill’, as interviewed by Kuba Armata

Iwo lives with his mother and sister in a small town. A tragic memory of the fire in the Black Mill casts shadow over the place. The fire has taken its toll on everyone, especially Iwo’s family. When his mother loses the only source of income, she must quickly find a new job, leaving Iwo to take care of his younger sister.

Kuba Armata: Did the idea for a film adaptation of another novel by Marcin Szczygielski – ‘Black Mill’ – come into your head in the wake of the huge success of ‘Behind the Blue Door’?

Mariusz Palej: It was actually the other way round. I first set my sights on ‘Black Mill’ but once I decided to get on with it, it turned out that someone else held rights to film adaptation and was not willing to renounce them, unfortunately. As the producer and I got really hyped up for this idea, we decided to somewhat roll with the punches and take on a different book by Marcin Szczygielski. ‘Behind the Blue Door’ was our choice. Luckily, we managed to get both stories to come to fruition.

Magdalena Nieć: I think that it was for the best because ‘Behind the Blue Door’ was easier to adapt. ‘Black Mill’ proved a bit tricky in this regard so our film is only vaguely based on the novel with quite considerable changes to the book plot. Marcin Szczygielski’s novel left a big mark on us also due to the fact that we wanted to follow through with the subject matter we had already dealt with. We are still telling the same story, albeit in a different manner. Yet the type of creative sensitivity, a key of sorts, is similar.

What exactly do you mean by that?

M.P.: On the one hand, we are addressing a very important social issue which is to raise awareness among the viewers; on the other hand, the form which we offer facilitates communication with the viewer and makes use of the language they are familiar with. ‘Behind the Blue Door’ gave us a clue how to decode ‘Black Mill’. There are three stories associated with that, and one actually involves Ale Kino! – the organiser of the ‘Great Adventure Film’ initiative. I was invited to take part in that project to help children with various types of disabilities make a film. They wrote the screenplay themselves – I was their mentor. They felt empowered, knowing that a real filmmaker is in it with them and treats them seriously. It was a profound experience for me which, in turn, inspired me to make ‘Black Mill’. The second story concerns meetings with young viewers after screenings of ‘Behind the Blue Door’ that Magda and I would frequently attend. Many of them were held at inclusive schools. It was amazing to observe how the kids from those facilities responded to our film.

M.N.: Another amazing thing was also how avid for culture their teachers were. Sometimes both of us would go, sometimes we went separately. Also, it was very interesting to see how differently ‘Behind the Blue Door’ was received in standard schools and in inclusive facilities. In the former ones, the questions predominantly concerned technical issues, while in the latter the children, who have experienced various diseases – therefore adopting a different perspective on life – focused mostly on emotions. Technology and emotions, just like science and soul. That really made us rethink life. In ‘Black Mill’, it became key for us to show the transition – from the lack of acceptance of people with disabilities to an increasingly open attitude to them.

And the third story?

M.P.: We were working for a certain foundation supporting families with children with disabilities. Magda wrote screenplays for short, 30-second social ads in the form of documents and I filmed them. We learned a dozen or so true stories which cannot leave the witness indifferent. This experience significantly changed our perception of ‘Black Mill’ and made us realise the potential hidden in that story. It was good that we ultimately made this film as the second one because otherwise we would have been lacking in that knowledge. The key to Iwo, our lead character, was the idea that a child with a disability is not the only victim in the house. Apart from the hard-working parents, also siblings of those children suffer. Mela and Iwo’s mum needs to focus 100% of her attention on the girl, therefore being unable to fully show the love to the other child. Iwo feels rejected and neglected. His initial egoism is somehow a rebellion in the face of the insatiable need to feel loved by the person he cares about.

What did you learn from the ‘Behind the Blue Door’ experience as regards young viewers?

M.P.: Two things. The young viewer is not stupid, contrary to what some decision-makers are trying to say, describing reality only via Excel spreadsheets. Children and youth want to talk – they are not satisfied with entertainment only. They are curious about the world around them, and have their own emotions and experiences. Touring the country with ‘Behind the Blue Door’ screenings, at some point I also started to learn which elements in the plot make the cinema hall so silent that you could hear a pin drop, and which, in turn, bring about little cracking noises from all the fidgeting in the chairs.

M.N.: What we’re dealing with, namely intense emotions and serious topics, finds its audience. This is what we take away from the experience – making ‘Behind the Blue Door’, we didn’t make any cold calculations. It takes a madman to put career first when making films for children. We were trying to find the middle ground between content and form, and apparently we succeeded. Interestingly, children worldwide reacted to our film in a similar way. I remember receiving a card from China with the answer to the question on what young viewers learned from the film. The message was brief, but highly important – don’t give up. Children are not corrupted by pop culture yet; they have the ability to separate that. Unless adults force them into moulds during their adolescence, these children will make extremely sensitive and level-headed people. There’s a child in us, too. We are trying to view the world through their eyes, as they see the truth and don’t distort it yet.

‘Black Mill’ is a tale about tolerance, acceptance, but also about independence. Children must arrive at certain conclusions on their own.

M.N.: It’s a tale about inclusion, tolerance, but also about coming of age. Iwo is a great example. He must make his own journey to transition from an egoist into someone who takes care about others and feels the sense of community with them. It is worth noting that whenever the film setting gets really dangerous, there are no adults there to accompany our characters. There is nobody to explain it to them, even Iwo and Mela’s mother so much awaited by them. At some point in our lives, we will eventually find ourselves in a situation where we can rely only on ourselves. ‘Black Mill’ is not only a film for children, but it is also for adults to ask themselves where they were when their loved ones needed help.

M.P.: The reality as we experience it now, capitalism, cause that we are often stuck at work and fail to notice our loved ones. We are sitting at the computer, engrossed in our work, pushing someone away. When the children in the film initially reject Mela, they simply mirror the behavioural patterns they observe in adults.

M.N.: We show the parents that it’s not tantamount to knowing the answer to any question. They can admit they are tired, that they don’t know what to do or they need a moment alone. And that’s OK. Seeking perfection is highly dangerous. You rarely find it, and you may get discouraged and leave along the way. Let’s not set ourselves ideals as goals. Let’s be honest, also to ourselves.

Is it exactly that acceptance and inclusion that you feel is lacking when you look around?

M.P.: We live in a country where the majority of the society finds it difficult to accept any diversity whatsoever. The political debate, the events of the past weeks have been a telling illustration of that. I think that if we learn to accept one element, then – at least I hope so – the children who have watched ‘Black Mill’ will show an open attitude towards people with disabilities, and adopt a different attitude towards other forms of diversity. Adults – parents, teachers, as well as artists – should talk with children about it.

M.N.: People suffering from a medical condition may not be able to overcome their limitations, but healthy people can do it for sure. Iwo gets to know Mela better when he himself experiences rejection. Suddenly, we realise that when it comes to feelings we are all the same. Both – Iwo and Mela – long for closeness, tenderness and acceptance. What is lacking in Poland is constructive criticism. Whenever we face a conflicting opinion, we immediately entrench ourselves. Only when we empathise with others do we start to get to know the world. I remember once I was walking with my son and we passed by a blind woman. Michał asked me loudly about it and I started to explain it to him. The lady approached us and thanked me for even talking about it with my son. She said that when people refuse to give children answers to such questions, the young immediately distance themselves. They estrange someone like her. That is why talking about it is so important. 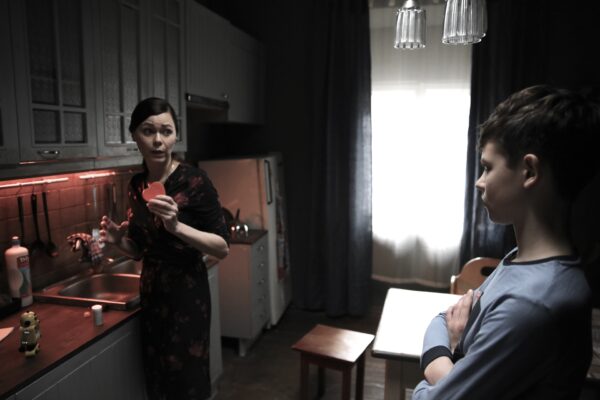 Magda, you play multiple roles in the film. You are the co-screenwriter, play the mother, and also the assistant director working with child actors. How would you describe the last role?

M.N.: I was also the casting director (laughter). It’s not my first job as an assistant director working with child actors. I did it on set of ‘Behind the Blue Door’ and ‘Werewolf’ by Adrian Panek. But I guess ‘Black Mill’ was the most difficult since the dialogues involve an interaction between a lot of children. Before, I could stand close to the camera and prompt them: ‘breathe deeply’, ‘frown’, ‘look to the left’. Here, the truth materialised on multiple levels. I tried to prepare the young actors and accompany them on set at all times, so as to ensure the best possible working conditions for Mariusz. It is important to treat each child individually and account for their differences. Some need to be encouraged, others ‘tamed’ to prevent them from getting burned out in the first scene. You need to be honest when you work with children, which also applies to the director. The director needs to be perfectly aware of what they intend to say. You can’t just sit down with a child and tell them: ‘Try something’. It is the director who needs to take initiative here and they cannot make a mistake. There’s no room for ‘either – or’ here. And that, in turn, requires a conscious creator because children need clear messages. In this relation, partnership, as well as concern for emotions are vital. So it’s a job for people who are empathetic by nature.