You can be whoever you want to be. Jonathan Elbers, the director of ‘The Club of Ugly Children’, as interviewed by Kuba Armata 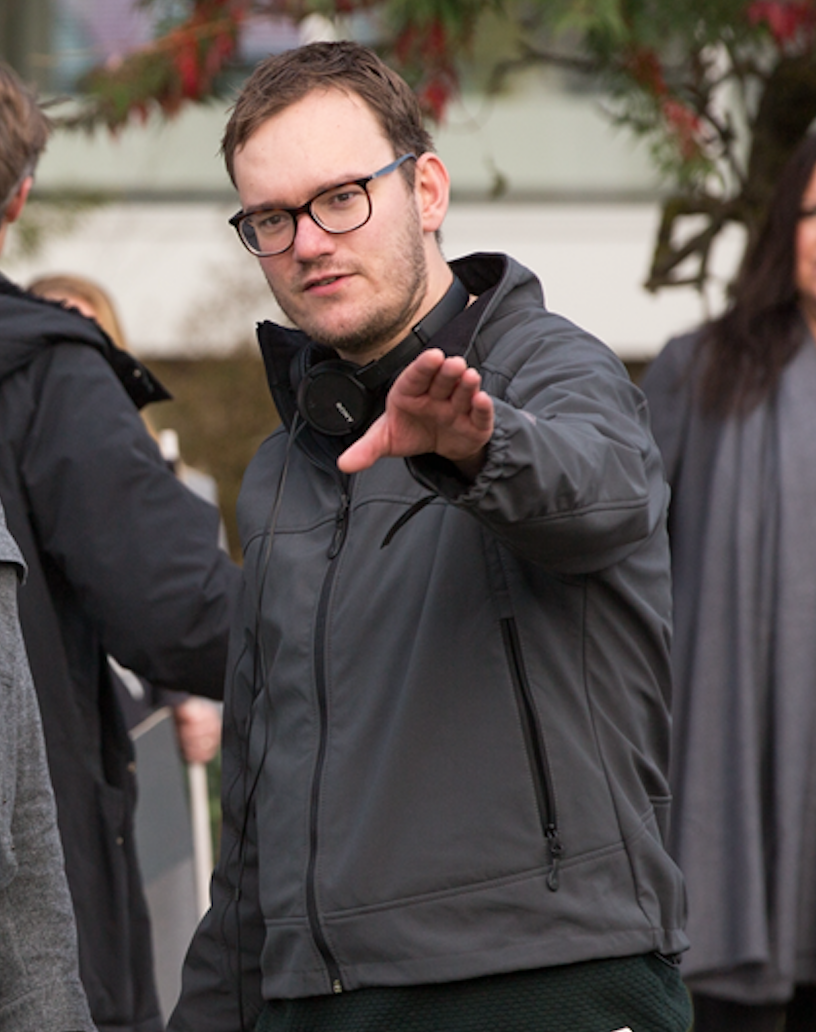 Paul’s country is a sort of regime, but the inhabitants believe they live in prosperity. One day, every student at his school has to pose for a photo. The children who will make the best impression on the president – the state’s benefactor – will go on a trip. On the final day it turns out that five children – considered by their peers the ugliest in school – won. Among them, Paul.

Kuba Armata: Where does this inherent need to judge others even come from?

Jonathan Elbers: I believe it’s a human thing. The announcement about the casting for our film stated we were looking for... ugly children. The parents bridled at that and many mothers tweeted that there are no ugly children and one shouldn’t even talk about others that way. Our only response to that was: ‘Come see the film, you will be surprised’ (laughter). We agreed that everyone is somewhat imperfect. That observation was even our motto of sorts. All the children who came to audition were asked about the things they disliked the most about their bodies. They got the joke perfectly. Ugly children is a kind of metaphor – it is not our intention to mock or criticise anyone. Another message of the film is that you can be whoever you want to be – regardless of your appearance. We had to face similar reactions back in 2012 when we were making a short film based on the same story. The parents were pissed off, while the children accepted everything with understanding. That does not change the fact, however, that judging others is deeply rooted in our system and you can’t prevent people from doing it. 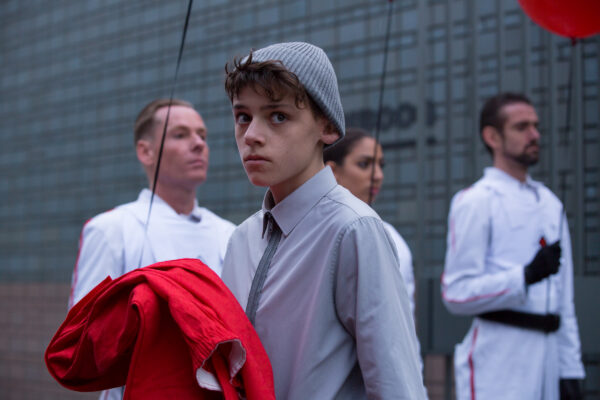 Don’t you think that social media today – which is also a very important part of your film – can be very brutal and step up the judgemental atmosphere?

Social media makes things worse. We, as adults, think that we know about that, but in fact have no idea how serious this phenomenon is. While making the film, there were about 800 children on set. I was a bit puzzled and overwhelmed by the amount of time they spend on social media. The young actor who plays the lead role, although perfectly aware of the scale of the production he was taking part in, kept checking Instastories each time after completing a given scene. All that fuss about social media was not included in the original screenplay. We added it precisely because of the cooperation with the children. At some point, I gave them mobile phones and instructed to go on set and make videos showing how beautiful life can be. Some of the materials were included in ‘The Club of Ugly Children’.

You mentioned the controversy about your casting situation. Did you have to talk this through a lot with the young actors?

We organised a big casting to be sure to have chosen people who knew exactly what we meant. If you get the joke – you’re welcome to join the cast, but if you feel offended by it, the casting for ‘The Club of Ugly Children’ is not the right place for you (laughter). There was also one very interesting and inspiring moment. There is a ginger boy in the film who is rather on the heavier side. He was bullied at school because of his hair colour and weight. During the première, he came up to me and said that the experience of working on the film had changed him and helped build his self-confidence. The very fact that he decided to take part in it, get along with other actors, was a breakthrough moment. It was something that he might have never ventured otherwise. And he wouldn’t have become the person he is now. Our film carries a positive message but we decided to cast only the children who – in our opinion – were sure to handle that.

The revolution aiming to bring down the regime starts with children, which is a great reference to what we currently observe – when young people are becoming more and more active and involved in important social issues – the climate crisis in particular. Do you have faith in this generation?

Very much so. From the acting perspective, children are the best because they show only honest emotions. In the context of politics, it is similar. Children would say what is right and what is wrong, and ask you why you’re doing the wrong thing. The protagonist’s father is a good example of the clash between them and adults. He is censored by his own adult mind, he is thinking about all the consequences he’d have to face if he decided to confront the president. He might lose his job; he might also lose his wife. There’s too much of the tentative ‘might’ for him. We wanted to illustrate that adults tend to overcomplicate many things. That is exactly why no change is happening. 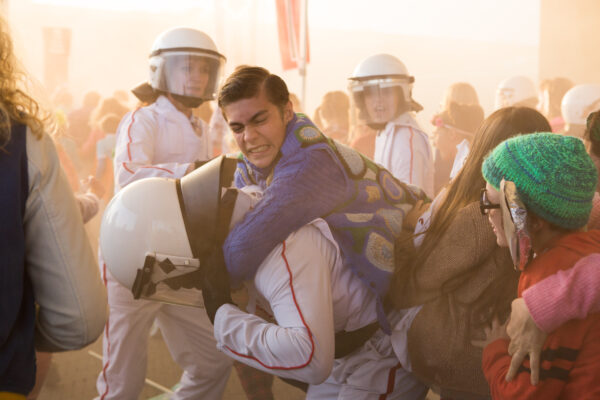 Your film is based on the book by Koos Meinderts. What did you like about it?

The book was published in 1987 and was a metaphor of WWII. It was the producer who came to me with the idea of transferring it to the screen. When I started reading it, I really liked the idea of ugly children as a kind of metaphor, as it has a stronger appeal to the imagination of young people. The concept of ugliness has strong resonance. Each of us feels this way at some point in our lives or feels insecure about certain body parts. This was the most important context for us. However, we wanted to make this novel a little more modern so that it would appeal to the current generation of children, not the one from the time the book was published. There was no such thing as social media then.

Speaking of books... When I was watching your film, it made me think of George Orwell’s novels.

The book lacks Orwellian themes; we created them de facto for the film. However, the main inspiration for us were different forms of authoritarian regimes. We studied footage from North Korea, China, and certain areas of Russia. All those countries that have experienced some form of oppression from the highest authorities. It was a rather long and dynamic process of documentation. Sometimes, I had the impression that history was chasing us. For example, there was a scene which was eventually cut out: when the president’s guards threw food for imprisoned children through a fortified fence. A year later, when refugees from Africa arrived on the Greek coast, you could see photographs of police officers doing exactly the same thing. When I thought about it, it seemed an abstraction, something even impossible. Unfortunately, however, it did happen, which is already sad enough. It all grew inside us when we were writing the screenplay. We made use of all these things and put them into a child’s universe so that young viewers would realise what it means to be bullied or persecuted. Soon did we realise that there was indeed something Orwellian to it. 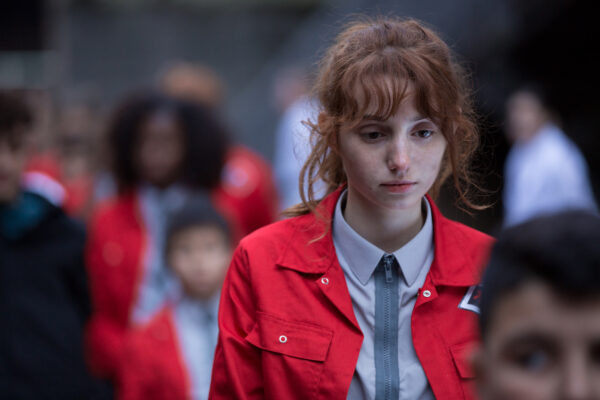 Interestingly, you are not only the director of the film, but also of a series based on this material.

In fact, it all started in 2012, when I made a short film based on this story as part of my diploma film. After that, we spent a few years adapting the material to the realities of a full-length production. In the short film, due to the very limited time frame, there was no room for current affairs. After the actual film, we made a series focusing on the story of a politician who becomes president and his rule gradually turns into a dictatorship.

The Netherlands is, alongside Scandinavia, an example of the strength of European cinema for children and young people. What is your view on that?

I think we are now on the verge of change. I am a big fan of Dutch films for young audiences, which I grew up on. And now I make them myself. So they have a special place in my heart. However, because of Netflix or other streaming platforms, children go to the cinema much less often than before. The current discussion revolves around the possible ways of getting young audiences back in front of the cinema screens. One way to do it is cast celebrities in films. In ‘The Club of Ugly Children’ a very famous Dutch singer plays one of the roles. I guess that some viewers came to the cinema just for her. I also think that Dutch films, like the Scandinavian productions, are bold, take up important topics and are not afraid of moving away from the sugar-sweet stereotype [of children’s cinema].